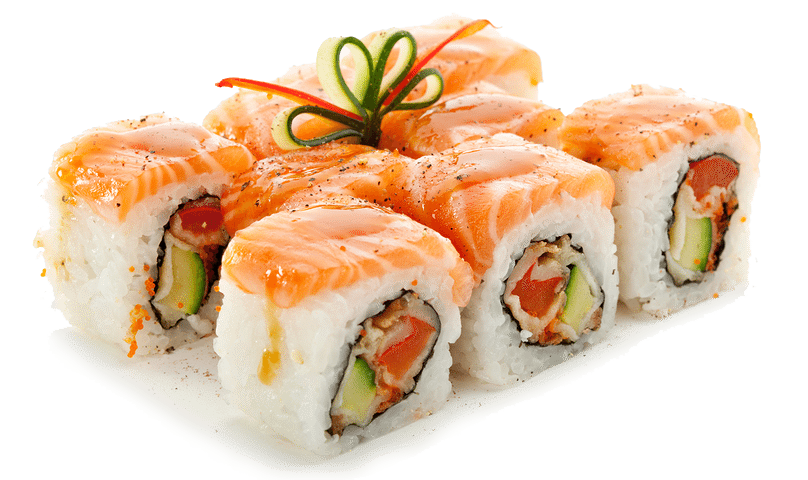 Sushi (すし, 寿司, 鮨?) is a type of food preparation originating in Japan, consisting of cooked vinegared rice (鮨飯 sushi-meshi) combined with other ingredients (ネタ neta) such as seafood, meat, vegetables and sometimes tropical fruits. Ingredients and forms of sushi presentation vary widely, but the ingredient which all sushi have in common is rice (also referred to as shari (しゃり) or sumeshi (酢飯)). Although commonly mistaken for sushi, sashimi, which is also a Japanese delicacy, consists of thinly sliced raw meat or fish and may or may not be served with rice.

Sushi can be prepared with either brown or white rice. It is often prepared with raw seafood, but some common varieties of sushi use cooked ingredients and many are vegetarian. Sushi is often served with pickled ginger, wasabi, and soy sauce. Popular garnishes are often made using daikon.

The original type of sushi, known today as nare-zushi (馴れ寿司, 熟寿司,) was first made in Southeast Asia. Fish was salted and wrapped in fermented rice, a traditional lacto-fermented rice dish. Narezushi was made of this gutted fish which was stored in fermented rice for months at a time for preservation. The fermentation of the rice prevented the fish from spoiling. The fermented rice was discarded and fish was the only part consumed. This early type of sushi became an important source of protein for the Japanese. The term sushi comes from an antiquated grammatical form no longer used in other contexts, and literally means “sour-tasting”, a reflection of its historic origin as a fermented food. The oldest form of sushi in Japan, narezushi, is still made by wrapping fish in soured fermenting rice, which causes the fish proteins to break down into their constituent amino acids. The fermenting rice and fish have both a sour and an umami taste.