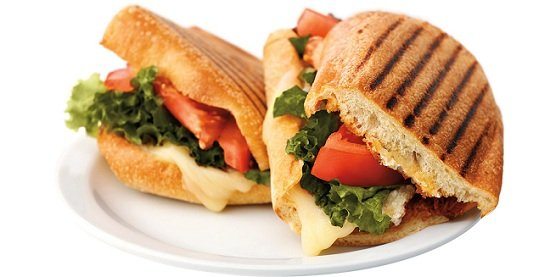 Panini is a word of Italian origin. In Italian the noun panino (Italian: [pa’ni:no]; plural panini) is a diminutive of pane (“bread”) and literally refers to a bread roll. Panino imbottito (“stuffed panino”) refers to a sandwich, but the word panino is also often used alone to indicate a sandwich in general. Similar to panino is tramezzino, a triangular or square sandwich made up of two slices of soft white bread with the crusts removed.

In English-speaking countries, panini is widely used as the singular form, with the plural form panini or paninis, though some speakers use singular panino and plural panini as in Italian.

Although the first U.S. reference to panini dates to 1956, and a precursor appeared in a 16th-century Italian cookbook, the sandwiches became trendy in Milanese bars, called paninoteche, in the 1970s and 1980s. Trendy U.S. restaurants, particularly in New York, began selling panini, whose popularity then spread to other U.S. cities, each producing distinctive variations of it.